The Abu Dhabi boys are quite adept at their most favourite sport from their country (Traditional Soccer), but there was no telling how they would fare or like the Australian game of Aussie Rules Football. 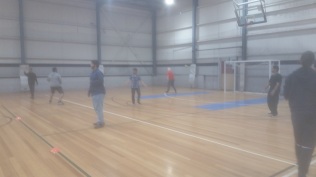 We set out to Lords Recreation centre a little earlier than usual today to give the students the opportunity to work with some of the best in the state at the sport.

Joe, Amy and Jordan from the West Coast Eagles support team helped run the session as they laid out the rules, expectations and history of the sport.

There seems to be a trend for a lot of the students to be in a state of despair before engaging in certain activities, they’ll all convinced themselves the worst is about to happen, but once they start actually doing the activity, the cheers and adulation seem to come out very naturally.

The students were taught how to do a hand pass and a drop punt to get them up to speed and able to play some drills and games to see who had a firmer grasp of the concept of the sport. 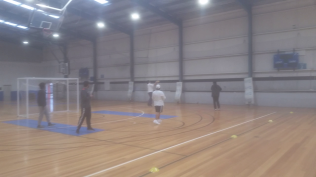 We played a variation of hot potato, which was more like catch the ball or you’re out, if the ball is near enough to you, then you’re out as well, and if you catch the ball you’re allowed one player back onto the court. The rag tag game ended up being quite popular, with the students asking for 1 more game as we were closing to full time.

The overall experience was a lot of fun for the students and they all appreciated learning a little bit more of the sport that some many Australians hold dearly.

Joe, Jordan and Amy let us have about 4 Footballs and all the students were given wrist bands to take home as souvenirs.