It was time to get our Spider-man on and learn to scale walls like the next arachnid.

Today we took the ADEC students to City Summit, located in Malaga.

I extend my own personal thank you to Borg and his fellow crew at City Summit as they made themselves clear, concise and always ensured all of the boys safety even though the group was as large as it was. The emphasis taken on this matter was serious and professional and I couldn’t have been happier with their conduct and execution. 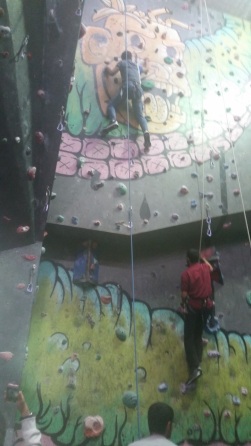 The students were fitted up upon arrival and then taken through a safety induction which really stressed the vital points of keeping the climbers and the belayer safe and sound when climbing. The students tackled an array of different walls which had a colour coded system indicating varying difficulty. Yellow, Blue, Red, Green and White (easiest to hardest); each colour and corresponding rocks formed a puzzle of which the climber must figure out to get to the finish line at the top. There were many variations of rocks which required the students to have the grip strength of a tiger, and the crazy inclines some of the walls exhibited made it an arduous task to climb to the summit.

Some of the staff showed us how it was meant to be done, and after witnessing first hand the prowess of the climbers the boys had a new found and deeper respect for the City Summit team.

A very full bodied and wholesome workout the students soon realised just how difficult this type of activity could be.

Some of the students tried their might with the Fireman’s rope and other safety rope climbing activities that they had, all of which was much harder than it seemed. 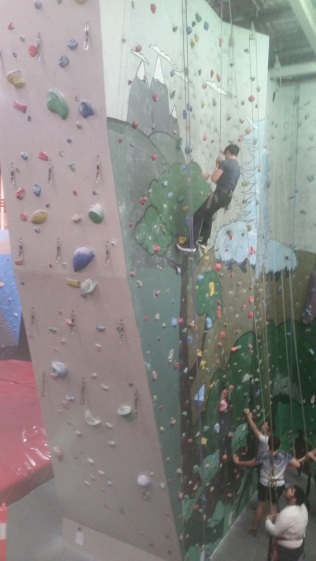 Here’s a picture of one of our Teachers Aidan (right) taking a selfie with one of our students Khaled (left).

After our monkey business was done, a very worn ADEC group returned on the bus to our Lexis English Campus.